Faculty Masterclass Series: The future of money and what it means for you, by Amin El Kholy Faculty Masterclass Series: The future of money and what it means for you, by Amin El Kholy

Get a taste of The Manchester Global Part-time MBA with our faculty-led masterclass series.

The global financial crisis of 2008 combined with recent technological and business developments are changing the world in ways which will  impact us all. For proof of this look no further than the announcement that Facebook is issuing its own currency called "libra" - something which has in our time been restricted to central banks run by governments. Other companies are likely to follow, and there are already a number of private "currencies" in existence with the most notorious being bitcoin. This means there will be several options of "private money" competing  with existing government controlled currencies for our attention and our business. More choice will result in benefits but the increased range of choices also has risks - how will you decide which money to use when? Would you rather be paid/do business in libra or US dollars? How about euros, or Venezuelan bolivars?

This talk will re-examine our concepts of money by looking at its current forms we are familiar with (but mostly do not understand) and what might change in the future. 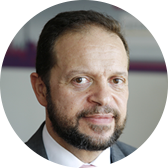 Amin El Kholy, after qualifying as a software engineer, worked on applying Artificial Intelligence techniques to business problems with a focus on logistics.  In 1997 he started his career in MENA asset management in London with United Bank of Kuwait and later CCF-HSBC. He moved to Dubai in 2004 to set up and manage the Asset Management department of National Bank of Dubai and went on to head up Shuaa Asset Management. Between 2009 and early 2017 Amin was responsible for building and managing the Equities Asset Management business at Arqaam Capital and is currently chairman of Introspect Capital (DIFC).

Since 2017, he has been a consultant to regional and international firms. He is involved executive training and coaching and is adjunct faculty at AMBS and other universities. He is actively involved in promoting FinTech through start-up mentoring, angel investing and public speaking.

Amin holds an MEng. degree in Software Engineering and a PhD. in Artificial Intelligence from Imperial College London, and an MBA from Alliance Manchester Business School.