Get a taste of The Manchester Global Part-time MBA with our faculty-led masterclass series.

Business models themselves are not new. They have always been implicit to exchange and value creation. Their emergence as an object of study is connected to the rise of the internet and the opening up of new possibilities for value creation and the associated development of information technology that has allowed alternative configurations of a business to be evaluated more cheaply. Of particular significance are new technologies that have the capacity to disrupt. Through a disruption, niches of users might be brought into a market where they had not been hitherto represented, other users might be pushed outward, and broader consumer behaviour might change. When a disruption emerges, there are winners and losers.

In this masterclass, we will go through the phenomenon of disruption by explaining well-known cases to identify what a disruption exactly means. In addition, we will introduce a reflection on the exponential growth of information technology and what its potential impact on businesses models might mean. 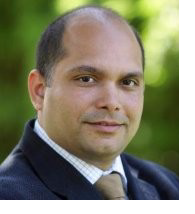 Oswaldo Lorenzo is a Visiting Professor at Alliance Manchester Business School (UK). He received his PhD from Warwick Business School (UK). Professor Lorenzo has also been guest professor at IESA (Panamá), Tec de Monterrey (México) and IAE Business School (Argentina). He has advised a number of companies and institutions in Europe and Latin America. He has been part of the founding teams of both a consulting firm and an internet business in Latin America. His papers and articles have been published in California Management Review, Information & Management, Journal of Business Ethics, and Communications of the Association for Information Systems.

His new book Entrepreneurship, Innovation & Technology: A Guide to Core Models and Tools has been recently released by Routledge Focus.